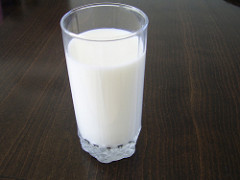 If I can’t have cow’s milk, where am I supposed to get my calcium? The next question should be, “Where does a cow get calcium?” Naturally, it’s from the food it eats. Likewise, we should concentrate on foods rich in calcium. There are numerous foods which provide calcium — green leafy vegetables, almonds, parsley, beet greens, broccoli, spinach, green beans, just to name a few.

Nature provides the protein linkages, fat molecules, and hormones intended to bring calves to maturity in two years, at about 2,000 pounds and with a low IQ. Humans are the only mammals who do not wean their young (or drink milk from another species).

Calcium is the most abundant mineral in our bodies and has numerous essential functions. The National Academies Press reported in 1997, that in addition to building bones and teeth, calcium is needed for blood vessel contraction and expansion and secretion of hormones and enzymes, as well as sending messages through the nervous system. A constant level of calcium is maintained in body fluid so these vital body processes function efficiently. Bone undergoes continuous remodeling, with constant resorption and deposit of calcium in new bone formation. The balance between resorption and deposition changes as people age. During childhood, there is a higher amount of bone formation and less breakdown. In early and middle adulthood, these processes are relatively equal. In aging adults, particularly among postmenopausal women, bone breakdown exceeds its formation, resulting in bone loss, which increases risk for osteoporosis.

In addition to the natural hormones found in all mammals’ milk, the latest high-tech onslaught on the cow is the addition of bovine growth hormone, better known as BGH. This genetically engineered drug is provided to stimulate increased milk production. A related problem is that it causes a marked increase (50-70%) in mastitis in cows. This, in turn, requires regular antibiotic therapy. These antibiotics and hormones are consumed with the milk by humans.

All lactating mammals excrete toxins through their milk. These include antibiotics, pesticides, chemicals, and hormones. Also, all cow’s milk is reported to contain blood. According to The Milk Letter: A Message to My Patients, by Robert M. Kradjian, MD, the USDA allows milk to contain from one to one and a half million white blood cells per milliliter (1/30 of an ounce). White blood cells found where they are not supposed to be found are called “pus cells.” If the cow has mastitis, there is pus in the milk. However, there are ways to camouflage that fact with language such as “macrophages containing many vacuoles and phagocytosed particles,” etc.

The dairy industry has done such an excellent job of marketing their product that the general public has the common belief that milk is its only source of calcium. We have been told that milk is an important source of calcium that helps kids grow up big and strong. Milk is said to contain vital nutrients and to help prevent osteoporosis. A well orchestrated $180 million annual advertising budget has convinced the US Department of Agriculture of the importance of dairy. Its dietary guidelines report that everyone should receive between 2-3 servings of dairy every day. Milk is advocated by various agencies of the US government, legions of physicians and white-mustached celebrities (e.g., Britney Spears, Carson Daly, Naomi Campbell, Spike Lee, and Rudy Giuliani).

A 12-year prospective study, reported in the American Journal of Public Health (1997; 87:992-7) was performed among 7,761 women (aged 34-59) who had never used a calcium supplement. Women who drank two or more glasses of milk per day had relative risks of 1.45 for hip fractures and 1.05 for forearm fracture, when compared with women consuming one glass or less per week. Higher intakes of total dietary calcium (or calcium from dairy products) were not associated with decreased risk of hip or forearm fracture.

A large Harvard study, reported in the Journal of Nutrition (1997; 127:1782-7) and the American Journal of Public Health (1997; 87:992-7), of male health professionals and female nurses reported that individuals who drank one glass of milk (or less) a week were at no greater risk of breaking a hip or forearm than those who drank two or more glasses per week.

However, another study, published in the New England Journal of Medicine (1997; 337:670-6), reported supplementation with calcium along with vitamin D significantly reduced bone loss and the incidence of nonvertebral fractures.

Very early in my chiropractic career, I serendipitously discovered that cow’s milk, if consumed regularly, will commonly contribute to a wide array of health problems including chronic back pain, a compromised immune system, and delayed food allergies. According to Amy Lanou, PhD, the nutrition director of the Physicians Committee for Responsible Medicine (PCRM), “Besides prostate cancer, milk has been linked to asthma, anemia, allergies, juvenile-onset diabetes mellitus, obesity, heart disease, and ovarian and breast cancer.” A study in the American Journal of Epidemiology (May 1, 2007) reported a study of more than 130,000 US adults, followed for nine years, confirmed a relationship between large amounts of dairy products and increased rates of Parkinson’s Disease.

Just a few weeks ago, a mother brought her 15-year-old son to our clinic for examination and treatment for chronic lower back and hip pain. His mother reported that he loves and excels at sports and “hurt his back” playing football during the seventh grade. Furthermore, she reported that following the injury, they had spent several thousand dollars trying to find what caused the pain and fix it. During the history I learned he consumed milk every day, and with most meals. On the physical examination, in addition to subjective pain reported to the lower back, the kidney flank was reported to be tender. He reported relief following a spinal diversified adjustment to correct the subluxation. I predicted that if he would avoid dairy, he would be well in a week.

Two weeks later, his mother reported him to be pain free, and he played in the season opening baseball game for his high school. Two years ago a 45-year-old female fell down her basement stairs on a Monday and was then transported to the hospital via ambulance. Numerous MRIs showed two large bulging discs between C6 and C7. Surgery was scheduled for the following Monday, with the plan being to replace the two ruptured discs with discs from a cadaver. Recovery time was expected to last a year. She got some good advice to try alternative therapies first. Rather than the planned surgery on Monday, she called for an appointment and arrived at our clinic with her right arm resting in a sling, and her left hand supporting her right elbow. She reported the pain was intense and radiated from her lower cervical spine to the right shoulder and into her arm and fingers. She was unable to drive due to the unrelenting pain. She brought copies of the MRIs, which revealed two of the largest bulging discs I had ever seen. While conducting the history, I learned she had long suffered from sinusitis and experienced frequent sore throats, colds, and influenza. Her diet was not the best, and she reported consuming milk daily. A very conservative treatment approach, with dietary counseling, nutritional support, light manipulation, and ultrasound was initiated. Effectiveness of treatment was certainly slow for the first two weeks. However, five weeks later she asked when could she play golf again. I advised, that in order to allow for maximum healing, to wait until the next summer. The next week she reported that she had played golf, and it didn’t hurt. We now see her occasionally for adjustments. Her diet has improved, and she avoids dairy. She reports no sinusitis, colds, or flu. She also plays volleyball, reportedly at 75% effort. In my experience and humble opinion, the consumption of dairy is responsible for numerous health problems and has increased the financial rewards of the health care profession exponentially.

In my experience and humble opinion, the consumption of dairy is responsible for numerous health problems and has increased the financial rewards of the health care profession exponentially.